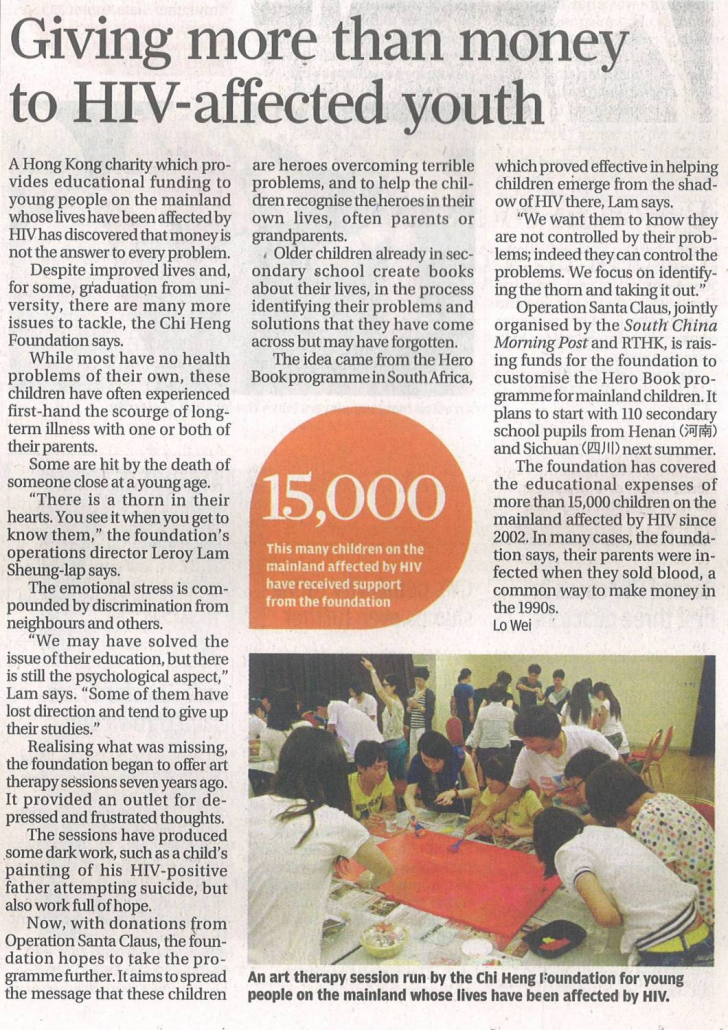 A Hong Kong charity which provides educational funding to young people on the mainland whose lives have been affected by HIV has discovered that money is not the answer to every problems.

Despite improved lives and, for some, graduation from university, there are many more issues to tackle, the Chi Heng Foundation says.

While most have no health problems of their own, these children have often experienced first-hand the scourge of long-term illness with one or both of their parents.

Some are hit by the death of someone close at a young age.

“There is a thorn in their hearts. You see it when you get to know them,” the foundation’s operations director Leroy Lam Sheung-lap says.

The emotional stress is compounded by discrimination from neighbours and others.

“We may have solved the issue of their education, but there is still the psychological aspect,” Lam says. “Some of them have lost direction and tend to give up their studies.”

Realising what was missing, the foundation began to offer art therapy sessions seven years ago. It provided an outlet for depressed and frustrated thoughts.

The sessions have produced some dark work, such as a child’s painting of his HIV-positive father attempting suicide, but also work full of hope.

Now, with donations from Operation Santa Claus, the foundation hopes to take the programme further. It aims to spread the message that these children are heroes overcoming terrible problems, and to help the children recognize the heroes in their own lives, often parents or grandparents.

Older children already in secondary school create books about their lives, in the process identifying their problems and solutions that they have come across but may have forgotten.

The idea came from the Hero Book programme in South Africa, which proved effective in helping children emerge from the shadow of HIV there, Lam says.

“We want them to know they are not controlled by their problems; indeed, they can control the problems. We focus on identifying the thorn and taking it out.”

Operation Santa Claus, jointly organized by the South China Morning Post and RTHK, is raising funds for the foundation to customize the Hero Book programme for mainland children. It plans to start with 110 secondary school pupils from Henan (河南) and Sichuan (四川) next summer.

The foundation has covered the educational expenses of more than 15,000 children on the mainland affected by HIV since 2002. In many cases, the foundation says, their parents were infected when they sold blood, a common way to make money in the 1990s.