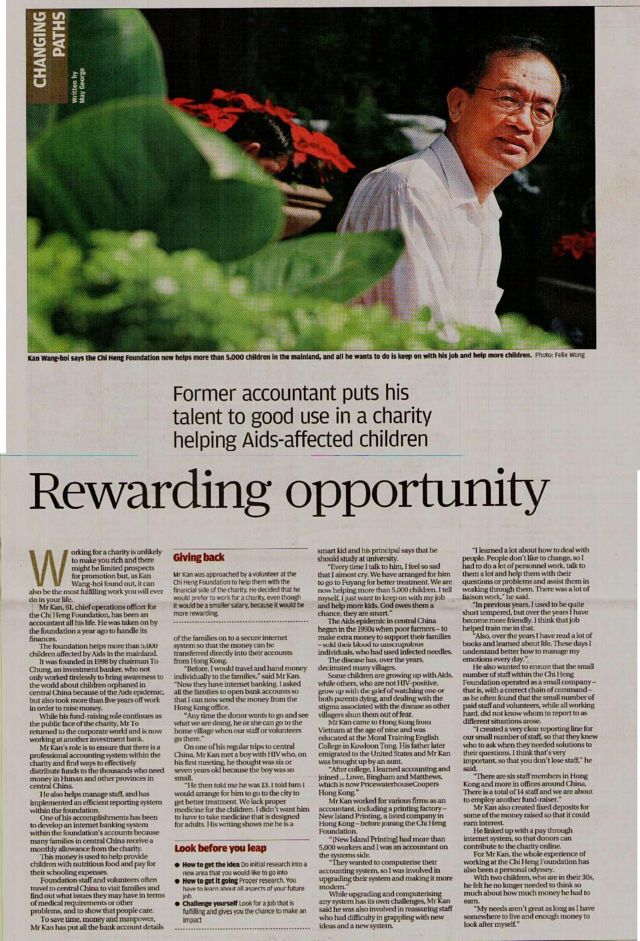 Working for a charity is unlikely to make you rich and there might be limited prospects for promotion but, as Kan Wang-hoi found out, it can also be the most fulfilling work you will ever do in your life.

Mr Kan, 61, chief operations officer for the Chi Heng Foundation, has been an accountant all his life. He was taken on by the foundation a year ago to handle its finances.

The foundation helps more than 5,000 children affected by Aids in the mainland.

It was founded in 1998 by chairman To Chung, an investment banker, who not only worked tirelessly to bring awareness to the world about children orphaned in central China because of the Aids epidemic, but also took more than five years off work in order to raise money.

While his fund-raising role continues as the public face of the charity, Mr To returned to the corporate world and is now working at another investment bank.

Mr Kan’s role is to ensure that there is a professional accounting system within the charity and find ways to effectively distribute funds to the thousands who need money in Hunan and other provinces in central China.

He also helps manage staff, and has implemented an efficient reporting system within the foundation.

One of his accomplishments has been to develop an internet banking system within the foundation’s accounts because many families in central China receive a monthly allowance from the charity.

This money is used to help provide children with nutritious food and pay for their schooling expenses.

Foundation staff and volunteers often travel to central China to visit families and find out what issues they may have in terms of medical requirements or other problems, and to show that people care.

To save time, money and manpower, Mr Kan has put all the bank account details of the families on to a secure internet system so that the money can be transferred directly into their accounts from Hong Kong.

“Before, I would travel and hand money individually to the families,” said Mr Kan. “Now they have internet banking. I asked all the families to open bank accounts so that I can now send the money from the Hong Kong office.

“Any time the donor wants to go and see what we are doing, he or she can go to the home village when our staff or volunteers go there.”

On one of his regular trips to central China, Mr Kan met a boy with HIV who, on his first meeting, he thought was six or seven years old because the boy was so small.

“He then told me he was 13. I told him I would arrange for him to go to the city to get better treatment. We lack proper medicine for the children. I didn’t want him to have to take medicine that is designed for adults. His writing shows me he is a smart kid and his principal says that he should study at university.

“Every time I talk to him, I feel so sad that I almost cry. We have arranged for him to go to Fuyang for better treatment. We are now helping more than 5,000 children. I tell myself, I just want to keep on with my job and help more kids. God owes them a chance, they are smart.”

The Aids epidemic in central China began in the 1990s when poor farmers – to make extra money to support their families – sold their blood to unscrupulous individuals, who had used infected needles.

The disease has, over the years, decimated many villages.

Some children are growing up with Aids, while others, who are not HIV-positive, grow up with the grief of watching one or both parents dying, and dealing with the stigma associated with the disease as other villagers shun them out of fear.

Mr Kan came to Hong Kong from Vietnam at the age of nine and was educated at the Moral Training English College in Kowloon Tong. His father later emigrated to the United States and Mr Kan was brought up by an aunt.

“After college, I learned accounting and joined … Lowe, Bingham and Matthews, which is now PricewaterhouseCoopers Hong Kong.”

Mr Kan worked for various firms as an accountant, including a printing factory – New Island Printing, a listed company in Hong Kong – before joining the Chi Heng Foundation.

“[New Island Printing] had more than 5,000 workers and I was an accountant on the systems side.

“They wanted to computerise their accounting system, so I was involved in upgrading their system and making it more modern.”

While upgrading and computerising any system has its own challenges, Mr Kan said he was also involved in reassuring staff who had difficulty in grappling with new ideas and a new system.

“I learned a lot about how to deal with people. People don’t like to change, so I had to do a lot of personnel work, talk to them a lot and help them with their questions or problems and assist them in working through them. There was a lot of liaison work,” he said.

“In previous years, I used to be quite short tempered, but over the years I have become more friendly. I think that job helped train me in that.

“Also, over the years I have read a lot of books and learned about life. These days I understand better how to manage my emotions every day.”

“I created a very clear reporting line for our small number of staff, so that they knew who to ask when they needed solutions to their questions. I think that’s very important, so that you don’t lose staff,” he said.

“There are six staff members in Hong Kong and more in offices around China. There is a total of 14 staff and we are about to employ another fund-raiser.”

Mr Kan also created fixed deposits for some of the money raised so that it could earn interest.

He linked up with a pay through internet system, so that donors can contribute to the charity online.

For Mr Kan, the whole experience of working at the Chi Heng Foundation has also been a personal odyssey.

With two children, who are in their 30s, he felt he no longer needed to think so much about how much money he had to earn.

“My needs aren’t great as long as I have somewhere to live and enough money to look after myself.”