The Standard : Students who grew up in shadow of AIDS offer lesson to youngsters (仅英文版本) 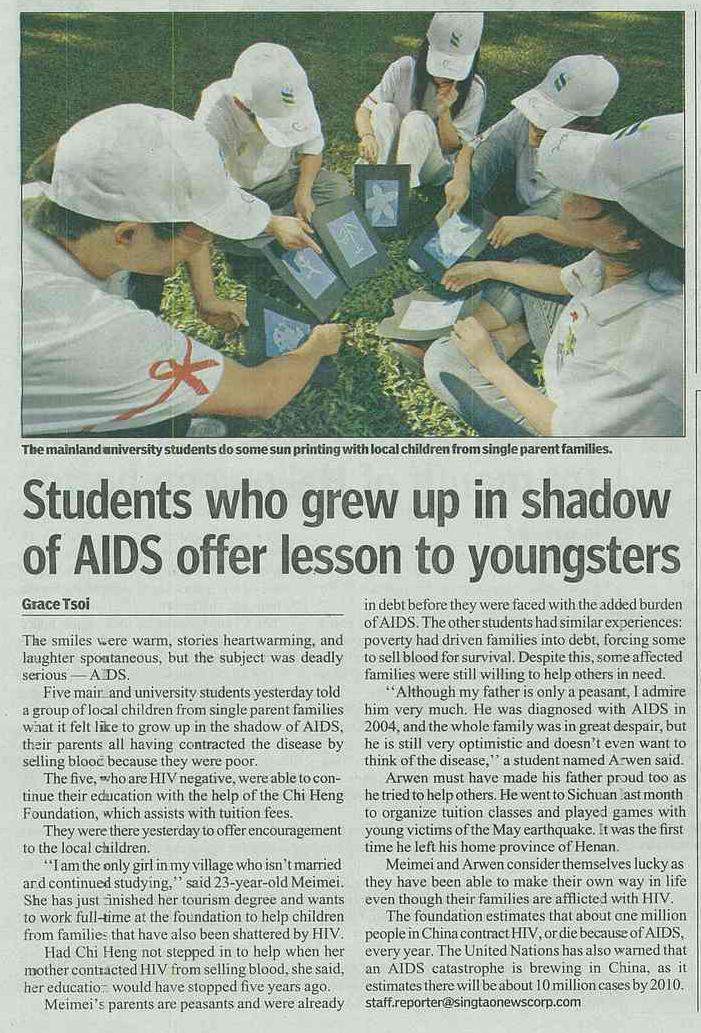 The smiles were warm, stories heartwarming, and laughter spontaneous, but the subject was deadly serious – AIDS.

Five mainland university students yesterday told a group of local children from single parent families what it felt like to grow up in the shadow of AIDS, their parents all having contracted the disease by selling blood because they were poor.

The five, who are HIV negative, were able to continue their education with the help of the Chi Heng Foundation, which assists with tuition fees.

They were there yesterday to offer encouragement to the local children.

“I am the only girl in my village who isn’t married and continued studying,” said 23-year-old Meimei.

She has just finished her tourism degree and wants to work full-time at the foundation to help children from families that have also been shattered by HIV.

Had Chi Heng not stepped in to help when her mother contracted HIV from selling blood, she said, her education would have stopped five years ago.

Meimei’s parents are peasants and were already in debt before they were faced with the added burden of AIDS. The other students had similar experiences: poverty had driven families into debt, forcing some to sell blood for survival.

Despite this, some affected families were still willing to help others in need.

“Although my father is only a peasant, I admire him very much. He was diagnosed with AIDS in 2004, and the whole family was in great despair, but he is still very optimistic and doesn’t even want to think of the disease,” a student named Arwen said.

Arwen must have made his father proud too as he tried to help others. He went to Sichuan last month to organize tuition classes and played games with young victims of the May earthquake.

It was the first time he left his home province of Henan.

Meimei and Arwen consider themselves lucky as they have been able to make their own way in life even though their families are afflicted with HIV.

The foundation estimates that about one million people in China contract HIV, or die because of AIDS, every year.

The United Nations has also warned that an AIDS catastrophe is brewing in China, as it estimates there will be about 10 million cases by 2010.