Get Inside His Psyche 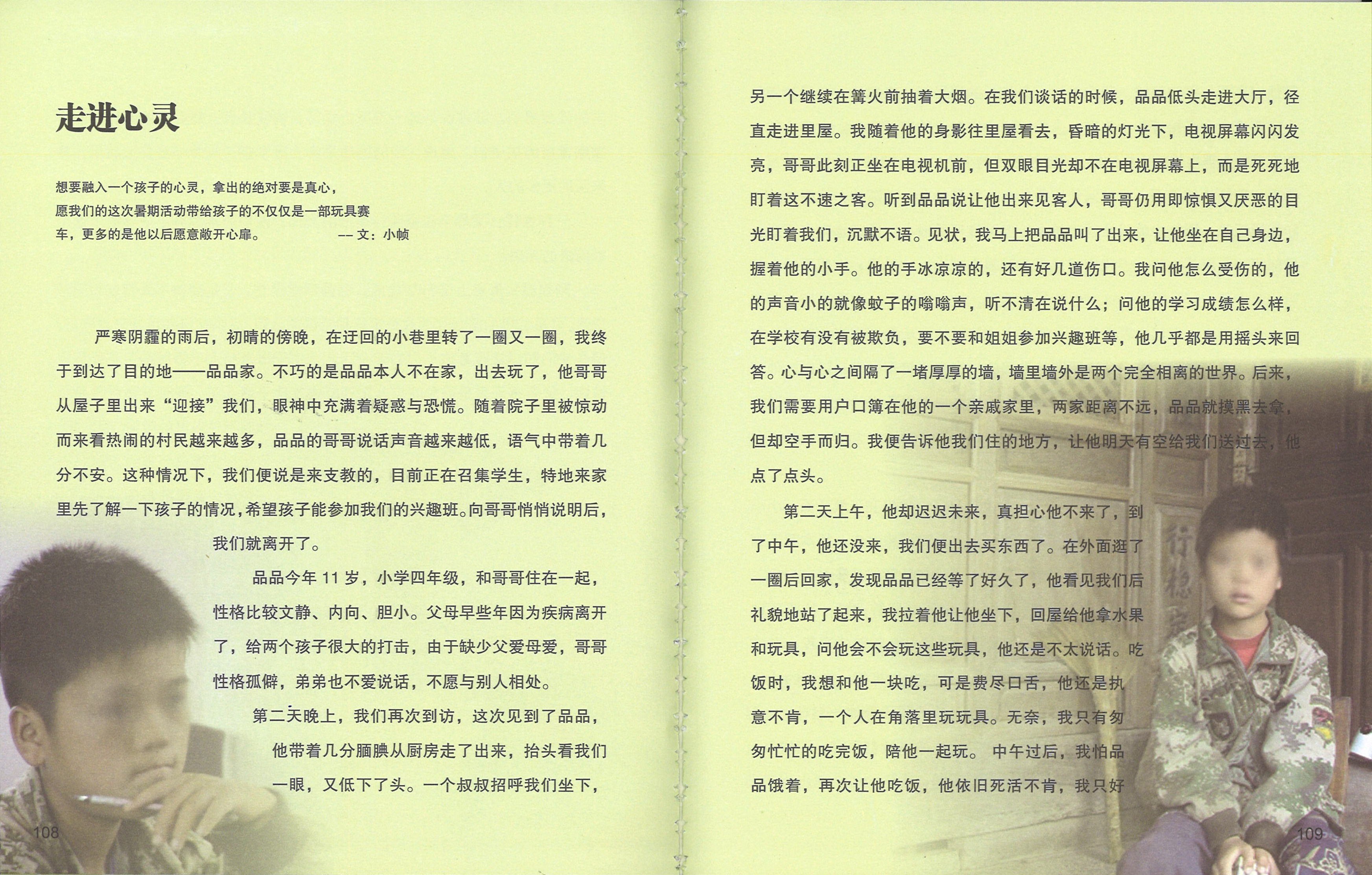 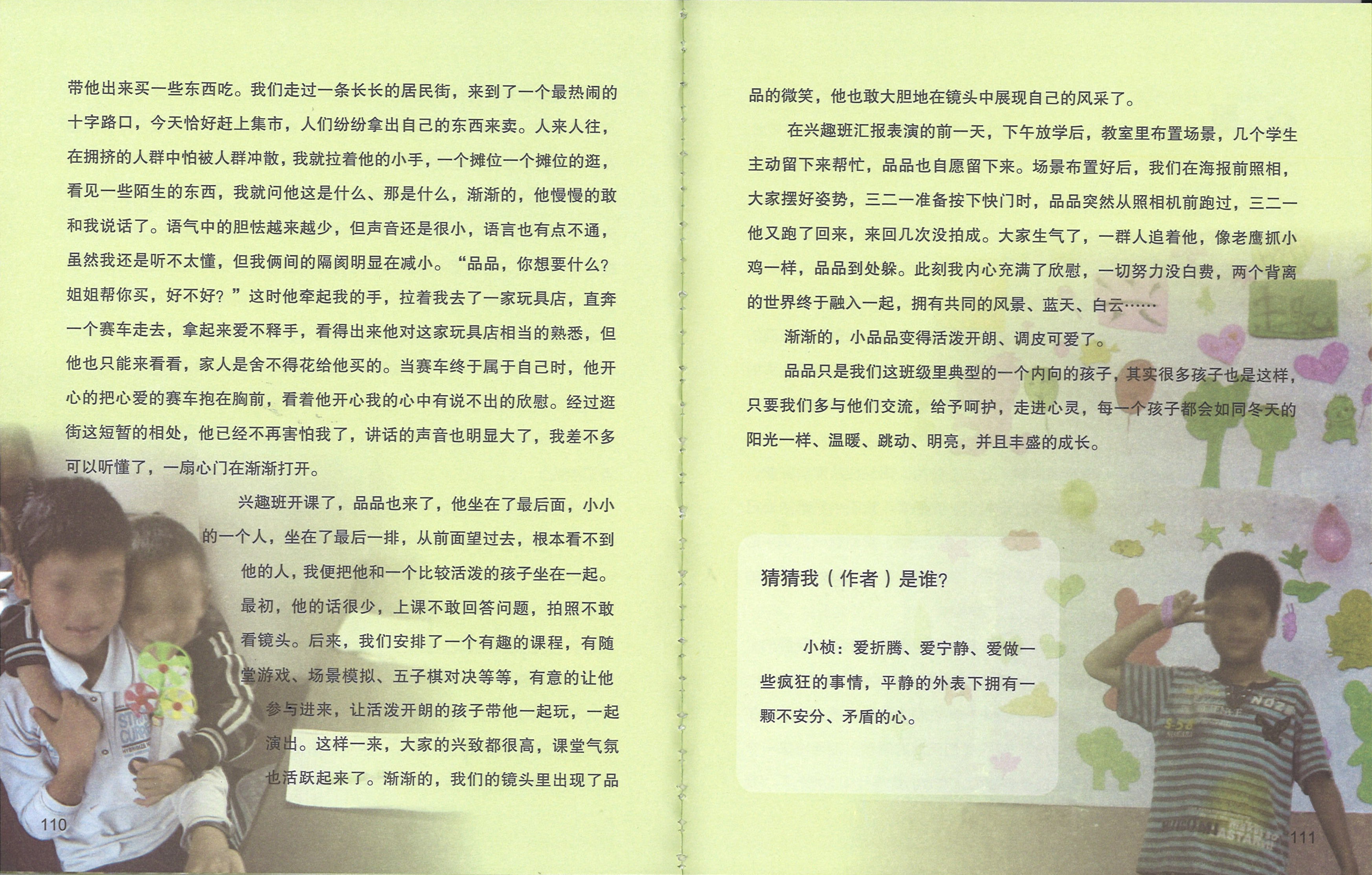 After the freezing rain had passed, as the sky started to clear in the early evening, I was going around in circles in the village’s little winding alleyways before I finally found my destination – the home of Pin Pin. Unfortunately, he had gone out to play and was not home. When his brother came out of the house to “welcome” us, his eyes were filled with suspicion and misgivings, and as more and more people noticed our presence and gathered in the courtyard to see what was happening, his voice got weaker and weaker, with obvious unease in his tone. Under these circumstances, we decided to merely say that we were here to recruit students for summer school and had come to find out about the family situation of the children in this household, to invite them to join our summer hobby classes. After quietly informing Pin Pin’s older brother about this, we quickly left.

Pin Pin, 11 this year, was in Grade 4 and living with his brother. He was quiet, introverted, and timid. His parents passed away from AIDS several years ago, and that was a big blow to the two brothers. Because they both lacked parental love from a young age, his brother had become a recluse, and Pin Pin himself also did not like to talk much or socialize with people.

We returned the next evening, and this time, we got to see Pin Pin. Emerging from the kitchen, the shy Pin Pin raised his head to take a look at us, and immediately lowered his head again. A man greeted and seated us in the courtyard, while another continued to smoke his pipe in front of the bonfire. As we were chatting away, Pin Pin walked right past us, his head still lowered, into the living room of the house. I followed his silhouette, and saw that there was a flickering TV in the dimly lit living room, and his brother was sitting in front of it. However, the brother’s sight was not on the TV but, rather, was fixated on us the uninvited guests. Even after Pin Pin asked him to come out to meet the visitors, his brother was still staring at us with an unnerved and disgusted look but without uttering a word. Seeing that, I immediately asked Pin Pin to come back out. I had him sit next to me and held his hand, which was ice cold with a few wounds on it. I asked him how the wounds came about. He answered with a weak voice like the sound of a mosquito’s buzz, so soft that I could not make out what he was saying. I then asked how he was doing at school, if anyone bullied him, and whether he would be interested in joining me at the summer hobby classes. Invariably, he merely shook his head to answer each question. I felt like there was a thick wall separating our minds, and on the two sides of the wall were two entirely different worlds. We asked to see the household register, which was in the home of a relative living not too far away, so Pin Pin went in the dark to fetch it, but he returned empty handed. Therefore, we told him where we were staying for the night, and asked that he bring it to us the following day in his spare time. He nodded but again did not say a word.

The next day, when Pin Pin still had not shown up by late morning, we started to worry whether he would come. As noon came and gone, and there was still no sign of him, we decided to go out for some shopping. However, upon our return, we found that Pin Pin had already been waiting for us for a while. He politely stood up when he saw us, and I invited him in to sit down and gave him some fruit and toys. I then asked if he knew how to play with those toys, but he still seemed reluctant to engage in any conversation. I wanted him to have lunch with me, but no matter what I said, he did not want to do that, and would rather just stay in a corner to play with his toys, so I hurriedly finished my lunch and went to play with him.

By mid-afternoon, I was again worried that he might be hungry and invited him to have some lunch, yet he still refused to do so. I decided to take him out and see if we could buy something that he liked to eat. After walking through a long residential street, we came to a bustling crossroad. That day happened to be market day, and all the villagers had brought out their goods and produce to sell. It was so busy, with people walking back and forth in all kinds of directions, that I was afraid the two of us would be inadvertently separated, so I held his little hand tight, and we went from stall to stall to find something that might interest him. When I saw something unfamiliar, I would ask him, “What is this? What is that?” Gradually, he started to drum up the courage to slowly talk to me, and I could sense a lessening of the timidity in his tone, but his voice was still very weak, and I was still having difficulty understanding him. Nevertheless, it was obvious that the gulf between us was starting to narrow. “Pin Pin, what would you like to have? This big sister will buy it for you, OK?” I asked. Upon hearing that, he grabbed my hand and led me to a toy store, making a beeline towards a racecar, which he picked up and would not let go of. It was obvious that he was quite familiar with this toy store, but up till then, all he was able to do was just to go in and look, as his family could not afford to buy any toy for him. Finally, when this longed for racecar came into his possession, he was so happy that he held it tight against his chest, and I, witnessing this scene, also felt an unspeakable pleasure in my heart. After this episode, he was no longer afraid of me, and when he talked, his voice became noticeably louder and more audible, to the extent that I could almost begin to make out what he was saying. I felt that the door to his psyche was starting to open.

Pin Pin showed up when the hobby classes commenced. At the beginning, he sat at the very back. As he was such a tiny person, I could hardly see him from where I was at the front of the classroom, so I moved him to be seated with a relatively lively child. Initially, he spoke up very little, was afraid to answer questions in class, and dared not look at the camera when pictures were taken. Later on, we instigated a more fun program that involved games in class, scene simulations, and chess matches. I purposely made him participate in these activities, to let the livelier and more cheerful kids play with him and act out simulations with him. This way, everyone became more keen and involved, and the classroom atmosphere turned much livelier. Gradually, Pin Pin’s smiles started appearing in our camera lenses, and he was no longer afraid to show himself off in full view of the cameras.

The day before the wrap up review and play-acting of the hobby classes, the classroom had to be decorated in the afternoon after classes were over. Several students, including Pin Pin, volunteered to stay behind to help. After the decoration was complete, we decided to take a group picture in front of the poster. Just as the group had posed for the picture and was waiting for the camera shutter, Pin Pin suddenly ran across the room in front of everyone, mischievously ruining the shot. When we tried it a second time, he did the same thing from the opposite direction. As such, we tried several times without success. People got mad at him, and chased him around the room, like the way old eagles chase after little chickens, and Pin Pin kept dodging them and hiding around to foil their attempts. Seeing the kids making fun of each other, my heart was filled with immense joy. My efforts had not gone to waste, and two different worlds had merged into one, enjoying the same landscape, the same blue sky, the same white clouds…

Bit by bit, little Pin Pin was turning into a cheerful, mischievous, and lovable child.

Pin Pin was just one typical introvert among the children in this particular class. There are actually many others like him in this world. If we could interact with them more and show them more love and care, every child could become like the winter sun – warm, vibrant, and bright – and can grow up hardily.