The Girl Who Wielded Wings 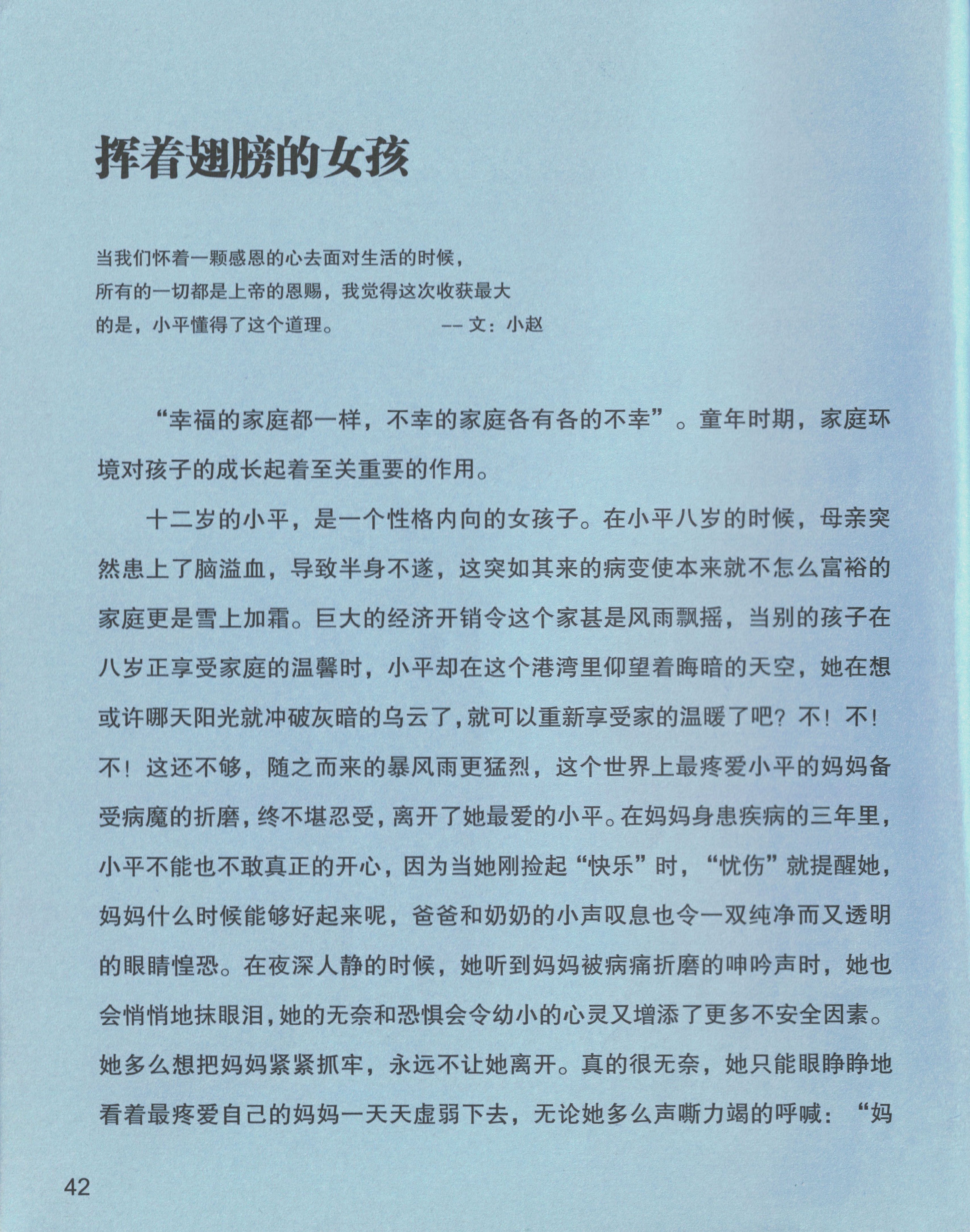 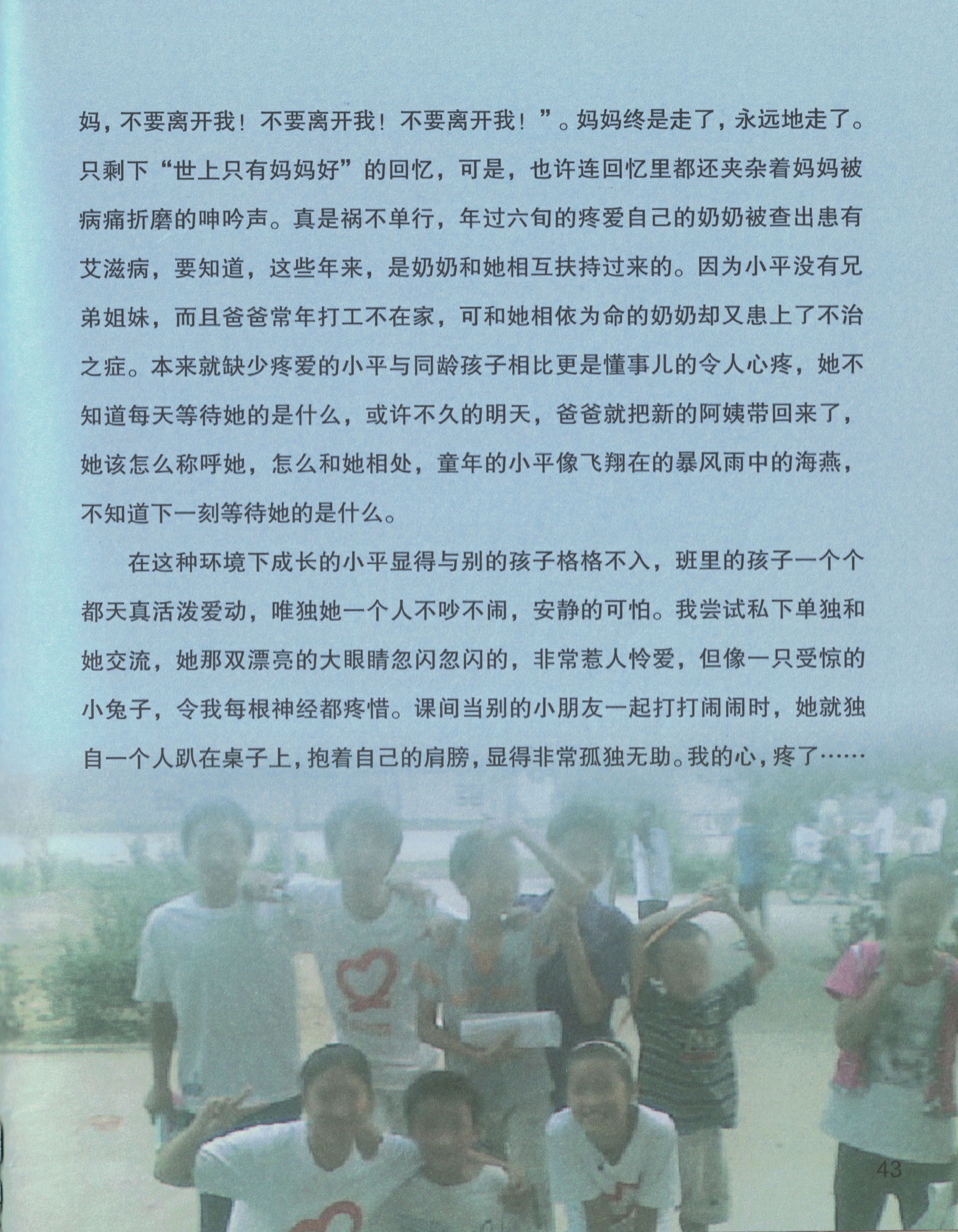 “Fortunate families are all the same, but the unfortunate ones each suffers from its own misfortune.” During childhood, the family environment plays a critical role in the upbringing of a child.

Xiao Ping, 12, was an introverted girl. When she was 8, her mother was paralyzed by a stroke. This sudden illness, with its associated medical expenses, plunged the poverty-stricken family into further financial hardship. While other 8-year-olds were enjoying their family pleasures, all Xiao Ping could do was to stare at the gloomy sky, wondering if, one day, the sun would cast away the dark clouds, so that she could once again enjoy some family warmth. Alas, it was not to be! As if this misfortune was not bad enough, what followed was even more devastating. Xiao Ping’s mother, who among all the people in the world loved her the most, eventually succumbed to her illness and passed away, leaving Xiao Ping behind. During the three years of her mother’s illness, Xiao Ping could not and dared not feel any happiness. Every time she attempted to think of the word “happiness”, something else called “anxiety” would remind her to wonder if her mother would ever get better. Worse still, her father’s and her grandmother’s persistent sighs struck fear into her innocent eyes about what might come next. In the depth of the night, when she overheard her mother’s tormented moans and groans, all Xiao Ping could do was to wipe away her own tears. Such a feeling of helplessness and the fear of what awaited them in the future injected further insecurity into her young soul. Oh, how much she wanted to hold her mother tight, never to let her go! Powerless, she could only watch her beloved mother get weaker by the day. No matter how desperately she cried, “Don’t leave me! Don’t leave me! Don’t leave me!” her mother still ended up departing this world. All that was left was a memory, like what is described in the children’s song On Earth, Only Mommy is Great. Unfortunately, for Xiao Ping, her mother’s struggles and moans during her illness were probably part of this memory as well.

There is a saying that misfortunes come in pairs. Next, Xiao Ping’s grandmother, already in her sixties, was diagnosed with AIDS. Since Xiao Ping was an only child, and her father was away from home working all year long, she and her grandmother had grown used to living together and caring for each other in all the years since her mother passed away, and they had become very close. But now, even the only remaining person she could rely on in life was found to have an incurable disease. Already rather devoid of family pleasures, this further blow to Xiao Ping really made her wonder each day what fate had in store for her. Perhaps, not far in the future, her father might bring home a new wife? How should Xiao Ping address her? How would they get along with each other? Young Xiao Ping was like a lone swallow caught in the middle of a hurricane, not knowing what would happen the next moment. As a result, she seemed more mature and understanding of things than others her age, so much so that it was distressing for me to watch.

Growing up under such circumstances made it difficult for Xiao Ping to fit in with the rest. The other kids in her class were all lively and active, but she alone was frighteningly quiet and withdrawn. When I attempted to talk with her in private, her large beautiful eyes, full of sparkle, displayed an immense loveliness, but she herself was like a scared rabbit, and that touched my every nerve. In class, when the other kids were getting rowdy, she would just sprawl on her desk, clutching her own shoulders, looking lonesome and helpless. That was painful enough to watch, but what pained me even more was that I had never seen her smile. That pair of frightened, spiritless, big eyes always stared at me with a hollow look, and that stabbed my heart. I found her despondence worrisome, as if the innocence and vivacity of children had nothing to do with her. She was confining herself to a dark world, keeping everything covered up and refusing to interact with anyone. Time and again, I pondered how I could be of help to her. I made two attempts, both times to no avail, as she was just too quiet and withdrawn. However, like the movie “Not A Single One Left Behind”, I was not going to give up on any one child.

I then worked on livening up the atmosphere in class. By encouraging every student to be participatory, I hoped that she would respond to the team spirit and feel valued and appreciated by others. After one week of this in-class program, the result was overwhelming. I recall that, one day, the lesson was about love and compassion. I told the class what a monotonous and dismal world the deaf-mute kids lived in, as they could only use sign language to communicate with others, and that, by contrast, we were far more fortunate, since we could hear the sounds of chirping birds and insects everyday. As I became more impassioned in my lecturing, I noticed that there were tears in the eyes of a few kids, but what was truly astonishing and unforgettable was the change in Xiao Ping after that class. To my utter surprise, she proactively waved goodbye to me! Xiao Ping had transformed from her withdrawn self, unwilling to interact with others, and unwilling to accept her teacher’s love and care, to now waving to me and saying, “Goodbye, teacher,” and her former spiritless and melancholy-filled face was displaying a mesmerizing smile. What a remarkable improvement that was! Suddenly, every single pore in me was gushing with happiness and elation, as if waves of warm current were flowing into my heart, and the gesture she made as she said goodbye was forever seared in my memory. Xiao Ping’s transformation deeply touched me. It gave me a thrill and happiness beyond description, making me feel like I was the luckiest person on earth.

It was on that same day that Xiao Ping started to actively respond to questions and uninhibitedly play with her fellow students. Though still a bit shy, her hearty laughs told me she could now experience joy like others her age could. Let us hope that her smiles will forever be like the brilliance of the sun, and come wind or rain, she can still boldly march forward to welcome every single day, just like the rose that can grow more hardily and bloom beautifully in the storm.

Perhaps because we belong to the same vulnerable group, my expectations for Xiao Ping are particularly high. I, too, was once an introverted and unsociable girl who grew up in a single-parent family. With low self-esteem, I stubbornly believed that I was far inferior to others. However, when I grew up, I suddenly realized that every experience in life was a treasure. It is only because God loves us so much that he has given us a pair of imperfect wings, to provide us with an experience different from the average person’s. We should consider ourselves lucky to have been able to give God such a challenge in his planning. We are already not the worst off. Don’t forget that, when we complain of not having shoes to wear, there are those who don’t even have feet to wear them!

My experience during those days has left me with a profound feeling: we should actively live in the here and now, treasure the blessings we already have, cherish the people around us, and welcome life each new day with a grateful heart.

The girl who wielded wings, best of luck to you!

Videos Get Inside His Psyche
Scroll to top