The Story of Miu Miu

Miu Miu (not her real name to protect her identity), a student in Shangcai County, was born in 1998, the same year Chi Heng was founded. She has been under our sponsorship for the last 14 years, since she entered grade one, and is currently a sophomore at SIAS International University, an affiliate of Zhengzhou University. Being a music and dance lover, she is enrolled in its School of Opera, studying music performance.

Her parents both contracted HIV from blood selling. Her mother passed away from AIDS years ago, while her father is still in fair health. She and her two older sisters were raised by their father and grandmother who is in her 80s. Of the three siblings, Miu Miu is the youngest. Her oldest sister was sponsored by Chi Heng for 14 years, has now graduated from school, and is working as a teacher at a kindergarten. Her second sister is HIV-positive and started school late due to her ill health. She has been sponsored by Chi Heng for the last 13 years and is now in first year undergraduate studying art. Because her father is the only bread earner at home, with little income from his part-time work, and grandma is elderly, their family finances are stretched.

Miu Miu wrote us a letter saying that she felt blessed and thankful for the continuous support received from Chi Heng, not only in education sponsorship for her and her sisters but also in material assistance that Chi Heng provided to her family every year. She felt that she benefitted from participating in the various Chi Heng activities, which gave her the chance to meet a lot of people and learn a lot. To her family, Chi Heng was a tremendous help, not only in terms of finances but also in spiritual comfort. She wrote that she was determined to work hard at school and also make a sincere effort to help others like what Chi Heng had done to her.

Miu Miu first took part in Walk for Chalk at Xian in 2009. She was only in grade 6 then but it was an unforgettable experience for her. It was her first time traveling far away from her village and her first time performing on a stage. There were many first-time experiences throughout the trip, which together instilled in her much self-confidence and courage. These experiences also inspired her into pursuing studies in stage performance later on in life. To this day, she still deeply treasures the various notes of encouragement given to her by the donor volunteers, their small gifts, and the group photos taken at the end the trip.

In 2015, Miu Miu participated in Walk for Chalk again, this time in Wuhan. By this time, she was studying at a technical secondary school and preparing for the university entrance examination. She was greatly touched when she met again some uncles and aunties whom she had got to know in the 2009 Walk for Chalk, but she also regretted that some other old 2009 acquaintances were not there, as she missed them a lot. The event this time reinforced her determination to get into university. Generally, it is much easier for a technical secondary school student to get into a 3-year diploma course than a 4-year undergraduate course that would lead to a bachelor’s degree. Prior to this Walk for Chalk, Miu Miu was merely thinking of getting into a diploma course, but after this event, she was inspired into aiming higher in life, so that she could have, like the donor volunteers, not only a good future for herself but also the ability to help others. Hence, after Walk for Chalk 2015, she worked even harder both in her classes and also her dance practice, and she successfully got into a 4-year bachelor program the following year.

In 2017, she joined our summer internship program to give encouragement and help to the younger sponsored students, as her way of paying back Chi Heng with her own action. 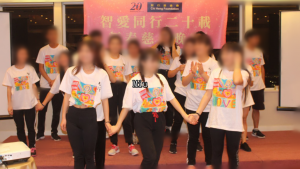