Good Samaritans come to the aid of AIDS orphans 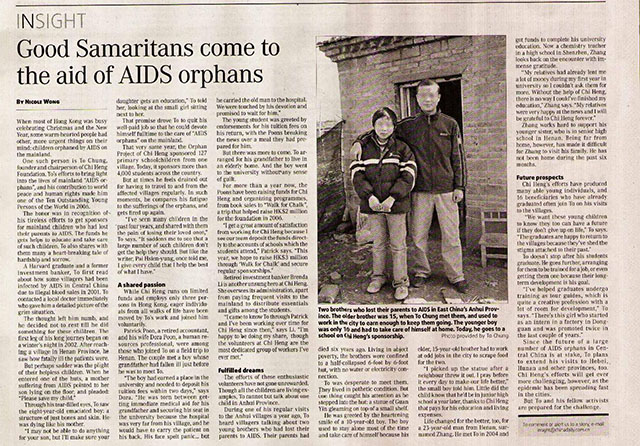 Good Samaritans come to the aid of AIDS orphans

When most of Hong Kong was busy celebrating Christmas and the New Year, some warm-hearted people had other, more urgent things on their mind: children orphaned by AIDS on the mainland.

One such person is To Chung, founder and chairperson of Chi Heng Foundation. To’s efforts to bring light into the lives of mainland “AIDS orphans”, and his contribution to world peace and human rights made him one of the Ten Outstanding Young Persons of the World in 2006.

The honor was in recognition of his tireless efforts to get sponsors for mainland children who had lost their parents to AIDS. The funds he gets helps to educate and take care of such children. To also shares with them many a heart-breaking tale of hardship and sorrow.

A Harvard graduate and a former investment banker, To first read about how some villagers had been infected by AIDS in Central China due to illegal blood sales in 2001. To contacted a local doctor immediately who gave him a detailed picture of the grim situation.

The thought left him numb, and he decided not to rest till he did something for these children. The first leg of his long journey began on a winter’s night in 2002. After reaching a village in Henan Province , he saw how fatally ill the patients were.

But perhaps sadder was the plight of their helpless children. When he entered one of the huts, a mother suffering from AIDS pointed to her son lying on the floor, and pleaded: “Please save my child.”

Through his tear-filled eyes, To saw the eight-year-old emaciated boy: a structure of just bones and skin. He was dying like his mother.

“I may not be able to do anything for your son, but I’ll make sure your daughter gets an education,” To told her, looking at the small girl sitting next to her.

That promise drove To to quit his well-paid job so that he could devote himself fulltime to the care of “AIDS orphans” on the mainland.

That very same year, the Orphan Project of Chi Heng sponsored 127 primary schoolchildren from one village. Today, it sponsors more than 4,000 students across the country.

But at times he feels drained out for having to travel to and from the affected villages regularly. In such moments, he compares his fatigue to the sufferings of the orphans, and gets fired up again.

“I’ve seen many children in the past four years, and shared with them the pain of losing their loved ones,” To says. “It saddens me to see that a large number of such children don’t get the help they should. But like the writer, Pai Hsien-yung, once told me, I give every child that I help the best of what I have.”A shared passionWhile Chi Heng runs on limited funds and employs only three persons in Hong Kong , eager individuals from all walks of life have been moved by To’s work and joined him voluntarily.

Patrick Poon, a retired accountant, and his wife Dora Poon, a human resources professional, were among those who joined To on a field trip to Henan . The couple met a boy whose grandfather had fallen ill just before he was to meet To.

“The boy had earned a place in the university and needed to deposit his tuition fees within two days,” says Dora. “He was torn between getting immediate medical aid for his grandfather and securing his seat in the university because the hospital was very far from his village, and he would have to carry the patient on his back. His face spelt panic… but he carried the old man to the hospital. We were touched by his devotion and promised to wait for him.”

The young student was greeted by endorsements for his tuition fees on his return, with the Poons breaking the news over a meal they had prepared for him.

But there was more to come. To arranged for his grandfather to live in an elderly home. And the boy went to the university without any sense of guilt.

For more than a year now, the Poons have been raising funds for Chi Heng and organizing programmes, from book sales to “Walk for Chalk”, a trip that helped raise HK$2 million for the foundation in 2006.

“I get a great amount of satisfaction from working for Chi Heng because I see our team deposit the funds directly to the accounts of schools which the students attend,” Patrick says. “This year, we hope to raise HK$3 million through ‘Walk for Chalk’ and secure regular sponsorships.”

Retired investment banker Brenda Li is another unsung hero at Chi Heng. She oversees its administration, apart from paying frequent visits to the mainland to distribute essentials and gifts among the students.

“I came to know To through Patrick and I’ve been working over time for Chi Heng since then,” says Li. “I’m happy to be doing my share, though the volunteers at Chi Heng are the most dedicated group of workers I’ve ever met.”

The efforts of these enthusiastic volunteers have not gone unrewarded. Though all the children are living examples, To cannot but talk about one child in Anhui Province .

During one of his regular visits to the Anhui villages a year ago, To heard villagers talking about two young brothers who had lost their parents to AIDS. Their parents had died six years ago. Living in abject poverty, the brothers were confined to a half-collapsed 6-foot by 6-foot hut, with no water or electricity connection.

To was desperate to meet them. They lived in pathetic condition. But one thing caught his attention as he stepped into the hut: a statue of Guan Yin gleaming on top of a small shelf.

He was greeted by the heartening smile of a 10-year-old boy. The boy used to stay alone most of the time and take care of himself because his elder, 15-year-old brother had to work at odd jobs in the city to scrape food for the two.

“I picked up the statue after a neighbour threw it out. I pray before it every day to make our life better,” the small boy told him. Little did the child know that he’d be in junior high school a year later, thanks to Chi Heng that pays for his education and living expenses.

Life changed for the better, too, for a 23-year-old man from Henan , surnamed Zhang. He met To in 2004 and got funds to complete his university education. Now a chemistry teacher in a high school in Shenzhen, Zhang looks back on the encounter with immense gratitude.

“My relatives had already lent me a lot of money during my first year in university so I couldn’t ask them for more. Without the help of Chi Heng, there is no way I could’ve finished my education,” Zhang says. “My relatives were very happy at the news and I will be grateful to Chi Heng forever.”

Zhang works hard to support his younger sister, who is in senior high school in Henan . Being far from home, however, has made it difficult for Zhang to visit his family. He has not been home during the past six months.

Chi Heng’s efforts have produced many able young individuals, and 16 beneficiaries who have already graduated often join To on his visits to the villages.

“We want these young children to know they too can have a future if they don’t give up on life,” To says. “The graduates are happy to return to the villages because they’ve shed the stigma attached to their past.”

To doesn’t stop after his students graduate. He goes further, arranging for them to be trained for a job, or even getting them one because their long-term development is his goal.

“I’ve helped graduates undergo training as tour guides, which is quite a creative profession with a lot of room for development,” To says. “There’s this girl who started as an intern in a factory in Dongguan and was promoted twice in the last couple of years.”

Since the future of a large number of AIDS orphans in Central China is at stake, To plans to extend his visits to Hebei, Hunan and other provinces, too. Chi Heng’s efforts will get ever more challenging, however, as the epidemic has been spreading fast in the cities.

But To and his fellow activists are prepared for the challenge.

To comment or alert us to a story, e-mail [email protected]

Two brothers who lost their parents to AIDS in East China’s Anhui Province . The older brother was 15, when To Chung met them, and used to work in the city to earn enough to keep them going. The younger boy was only 10 and had to take care of himself at home. Today, he goes to a school on Chi Heng’s sponsorship.

#Photo provided by To Chung

Back to CHF Related Articles
SCMP : We are running out of time to help China’s Aids orphans SCMP : Aids tragedy trio run for a cause
Scroll to top