SCMP : We are running out of time to help China’s Aids orphans 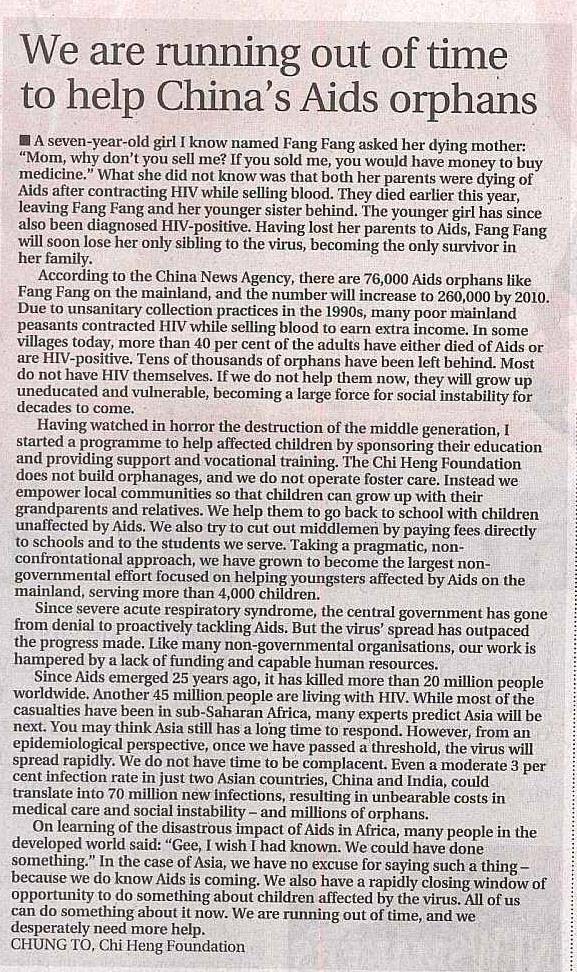 A seven-year-old girl I know named Fang Fang asked her dying mother: “Mom, why don’t you sell me? If you sold me, you would have money to buy medicine.” What she did not know was that both her parents were dying of Aids after contracting HIV while selling blood. They died earlier this year, leaving Fang Fang and her younger sister behind. The younger girl has since also been diagnosed HIV-positive. Having lost her parents to Aids, Fang Fang will soon lose her only sibling to the virus, becoming the only survivor in her family.

According to the China News Agency, there are 76,000 Aids orphans like Fang Fang on the mainland, and the number will increase to 260,000 by 2010. Due to unsanitary collection practices in the 1990s, many poor mainland peasants contracted HIV while selling blood to earn extra income. In some villages today, more than 40 per cent of the adults have either died of Aids or are HIV-positive. Tens of thousands of orphans have been left behind. Most do not have HIV themselves. If we do not help them now, they will grow up uneducated and vulnerable, becoming a large force for social instability for decades to come.

Having watched in horror the destruction of the middle generation, I started a programme to help affected children by sponsoring their education and providing support and vocational training. The Chi Heng Foundation does not build orphanages, and we do not operate foster care. Instead we empower local communities so that children can grow up with their grandparents and relatives. We help them to go back to school with children unaffected by Aids.

We also try to cut out middlemen by paying fees directly to schools and to the students we serve. Taking a pragmatic, non-confrontational approach, we have grown to become the largest non-governmental effort focused on helping youngsters affected by Aids on the mainland, serving more than 4,000 children.

Since severe acute respiratory syndrome, the central government has gone from denial to proactively tackling Aids. But the virus’ spread has outpaced the progress made. Like many non-governmental organisations, our work is hampered by a lack of funding and capable human resources.

Since Aids emerged 25 years ago, it has killed more than 20 million people worldwide. Another 45 million people are living with HIV. While most of the casualties have been in sub-Saharan Africa, many experts predict Asia will be next. You may think Asia still has a long time to respond. However, from an epidemiological perspective, once we have passed a threshold, the virus will spread rapidly. We do not have time to be complacent. Even a moderate 3 per cent infection rate in just two Asian countries, China and India, could translate into 70 million new infections, resulting in unbearable costs in medical care and social instability – and millions of orphans.

On learning of the disastrous impact of Aids in Africa, many people in the developed world said: “Gee, I wish I had known. We could have done something.” In the case of Asia, we have no excuse for saying such a thing – because we do know Aids is coming. We also have a rapidly closing window of opportunity to do something about children affected by the virus. All of us can do something about it now. We are running out of time, and we desperately need more help.