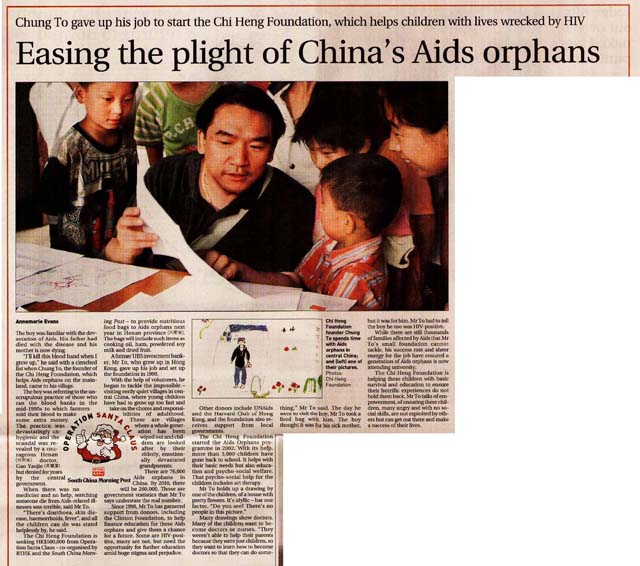 The boy was familiar with the devastation of Aids. His father had died with the disease and his mother is now dying.

I’ll kill this blood hand when I grow up, he said with a clenched fist when Chung To, the founder of the Chi Heng Foundation, which helps Aids orphans on the mainland, came to his village.

The boy was referring to the unscrupulous practice of those who ran the blood banks in the mid-1990s to which farmers sold their blood to make some extra money. The practice was devastatingly unhygienic and the scandal was revealed by a courageous Henan doctor, Gao Yaojie but denied for years by the central government.

When there was no medicine and no help, watching someone die from Aids-related illnesses was terrible, said Mr To.

There’s diarrhoea, skin disease, haemorrhoids, fever, and all the children can do was stand helplessly by, he said.

The Chi Heng Foundation is seeking HK$500,000 from Operation Santa Claus – co-organised by RTHK and the South China Morning Post – to provide nutritious food bags to Aids orphans next year in Henan province . The bags will include such items as cooking oil, ham, powdered soy milk and dried fruit.

A former UBS investment banker, Mr To, who grew up in Hong Kong, gave up his job and set up the foundation in 1998.

With the help of volunteers, he began to tackle the impossible – visiting eerily quiet villages in central China, where young children have had to grow up too fast and take on the chores and responsibilities of adulthood. These are villages where a whole generation has been wiped out and children are looked after by their elderly, emotionally devastated grandparents.

Since 1998, Mr To has garnered support from donors, including the Clinton Foundation, to help finance education for these Aids orphans and give them a chance for a future. Some are HIV-positive, many are not, but need the opportunity for further education amid huge stigma and prejudice.

Other donors include UNAids and the Harvard Club of Hong Kong, and the foundation also receives support from local governments.

The Chi Heng Foundation started the Aids Orphans programme in 2002. With its help, more than 3,000 children have gone back to school. It helps with their basic needs but also education and psycho-social welfare. That psycho-social help for the children includes art therapy.

Mr To holds up a drawing by one of the children, of a house with pretty flowers. It’s idyllic – bar one factor. Do you see? There’s no people in this picture.

Many drawings show doctors. Many of the children want to become doctors or nurses. They weren’t able to help their parents because they were just children, so they want to learn how to become doctors so that they can do something, Mr To said. The day he went to visit the boy, Mr To took a food bag with him. The boy thought it was for his sick mother, but it was for him. Mr To had to tell the boy he too was HIV-positive.

While there are still thousands of families affected by Aids that Mr To’s small foundation cannot tackle, his success rate and sheer energy for the job have ensured a generation of Aids orphans is now attending university.

The Chi Heng Foundation is helping these children with basic survival and education to ensure their horrific experiences do not hold them back. Mr To talks of empowerment, of ensuring these children, many angry and with no social skills, are not exploited by others but can get out there and make a success of their lives.

Back to CHF Related Articles
SCMP : Families suffer the legacy of China’s blood scandal SCMP : We are running out of time to help China’s Aids orphans
Scroll to top